Massachusetts dispensaries rang up $9.3 million in recreational marijuana sales during the first four weeks of operation, an impressive feat considering only two stores were selling adult-use cannabis during the bulk of this period.

The two Massachusetts dispensaries – Cultivate in Leicester and New England Treatment Access (NETA) in Northampton – took in more than $440,000 on the first day of sales, and the state averaged $2.3 million in sales per week.

Two more dispensaries – Verilife in Wareham and Insa in Easthampton – were approved to commence recreational sales in late December, with several other dispensaries slated for approval in the new year.

Another hurdle for the market: Sales began Nov. 20 – a Tuesday – and were halted that Thursday for Thanksgiving, abbreviating the first week to five days.

ATG went a step further, requiring adult-use customers to make an appointment to visit the dispensary.

The Marijuana Business Factbook 2018 estimates that Massachusetts has 900,000 to 1.1 million in-state customers.

And, as the first Eastern state to begin legal adult-use sales, Massachusetts is expected to benefit from the region’s population density.

The state is on pace to break $14 million in recreational sales in 2018.

Here’s what else you need to know:

Maggie Cowee can be reached at maggiec@mjbizdaily.com

Eli McVey can be reached at elim@mjbizdaily.com

Consumers spent $440,000 on marijuana products in Massachusetts on first day of recreational sales 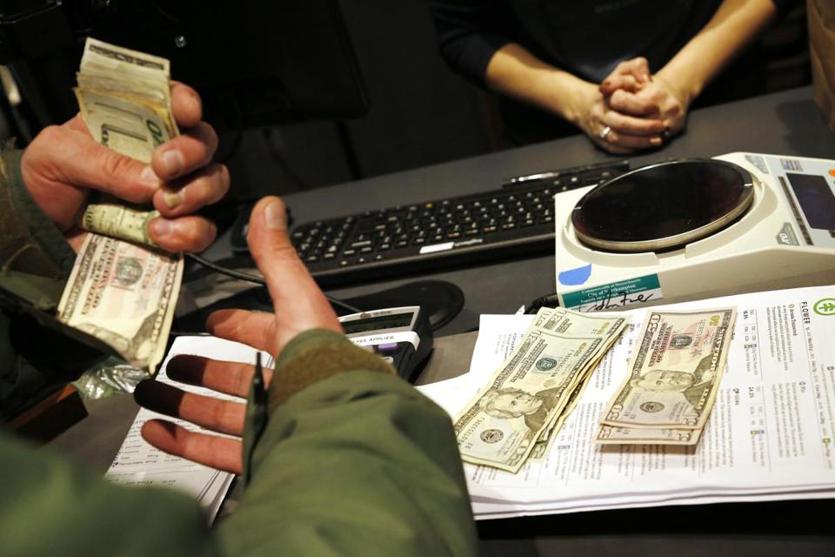 Michael Swensen for The Boston Globe

A man paid for his order of recreational marijuana products from NETA in Northampton on Tuesday.

The smoke has cleared, and the numbers are in.

On Tuesday, the first day of legal marijuana sales in Massachusetts, consumers spent a total of $440,011 at two stores on more than 10,700 individual cannabis products, according to data released by the state Cannabis Control Commission Wednesday afternoon

The products, purchased at the first two stores to open, ranged from marijuana flower to pot concentrates to pre-rolled joints to edibles infused with THC, the main psychoactive compound in cannabis.

Marijuana cultivation could come to Gardner

GARDNER — The cannabis company Tetramed has reached an agreement with the Gardner Redevelopment Authority to purchase land at the former S. Bent furniture factory site on Mill Street, with plans to build a marijuana cultivation facility.

Tetramed CEO Mike Brickey said the company was formed earlier this year to operate in Massachusetts; voters in the state legalized recreational marijuana back in 2016 but the rollout since has taken considerable time.

Brickey said the cultivation facility in Gardner would specifically be used to grow recreational marijuana. He described the Tetramed management team as having experience in all aspects of the marijuana industry, including his own prior experience in Denver, Colorado.

“We saw the opportunity in Massachusetts. It took years to get to this point but it looks like they’re finally getting it right,” he said. “We want to be able to produce lab-tested, clean, quality product to the retail locations that will be open.”

Building a cultivation facility in Gardner is not a guarantee at this point. The Gardner Redevelopment Authority is led by Executive Director Trevor Beauregard, who also serves as the city’s planning director, and who declined to comment on how much the land is being sold for, saying he cannot specify until the deal is closed.

Brickey also declined to specify the amount. While an agreement is in place, Brickey said, the company would not close on the deal until it receives a provisional license to operate from the Cannabis Control Commission, the state’s regulatory body for the marijuana industry.

The company submitted its application to the state on Oct. 7, he said, estimating that process could take three months.

Tetramed has agreed to purchase an about 10-acre parcel of land on the corner of Mill and Winter streets, on the north side of Mill Street, which is part of the now-demolished S. Bent site that included vacant, blighted buildings and required environmental clean-up.

Brickey said the company plans to construct a 55,000-square-foot facility, saying the marijuana will be grown in a greenhouse and there will also be a headhouse that includes space to make marijuana-infused products, such as edibles, and marijuana extractions, such as oil.

Including contingency, he said “our total investment is $16 million that will be going into that property.”

Regarding timeline, he said “realistically we’re hoping to begin site work and construction in March, 2019” and that the company plans to have its facility open in late 2019.

Brickey added that the company could look to then expand its facility after it has been open for a year.

Tetramed has already signed a Community Host Agreement with the city, agreeing to pay the city 3 percent of its gross sales over a five-year period. That is on top of any real estate and personal property taxes owed.

The agreement also includes the company agreeing to prioritize hiring local workers (outside of senior management) and local vendors, and also committing “to support local organizations which provide services and opportunities to the local community.”

He added the company plans to set up an outreach program to support charitable groups.

Brickey spoke positively of the Gardner city officials the company has worked with, saying they are “the most cooperative” he has ever dealt with.

Regarding the impact that growing marijuana at the facility would have on the people who live nearby, he said, “You won’t see it. You won’t smell it. You won’t hear it.”

Beauregard said the former S. Bent property is appropriate in his view for a cultivation facility because it is a “manufacturing operation” and “zoned properly” given it is in an industrial area.

“If everything pans out, it will create new jobs and redevelop and old brownfield site. I think it’s a good fit and I think the board (of the Redevelopment Authority) felt the same way,” he said.

The council took an initial vote in favor of the new zoning proposal at their Oct. 15 meeting, but a second vote is still needed for passage.

Marijuana establishments require a special permit from the Planning Board under the proposal.

The former S. Bent site comprised multiple parcels on both the south and north side of Mill Street. The buildings that were there have all been demolished, with Beauregard saying the last building came down in 2015.

Beauregard said the S. Bent furniture factory was founded in 1867 and specialized in different varieties of chairs over the course of its existence.

He said in 2000, operations ceased and a lack of maintenance led to the buildings’ deteriorating condition.

In 2007, the city took the S. Bent property through tax title foreclosure. That began a lengthy process over several years for the city to acquire grant funding from multiple sources to perform environmental testing, clean-up and demolition.

Beauregard said a total of about $1.8 million went toward the effort, with the majority of that coming from the federally funded Community Development and Block Grant program.

In 2016, he said, the Gardner Redevelopment Authority took ownership of the site. The agency then marketed the available property.